PMCC receives the single-largest philanthropic gift to a hospital in Canadian history at $100M.

The Peter Munk Cardiac Centre received the single-largest gift to a hospital in Canadian history, with the announcement of a “transformative”‘ commitment of $100 million from the Peter and Melanie Munk Charitable Foundation.

The announcement, made on September 19 at the Toronto General Hospital, drew a standing ovation from a crowd of patients, medical staff, researchers, business leaders and government officials. 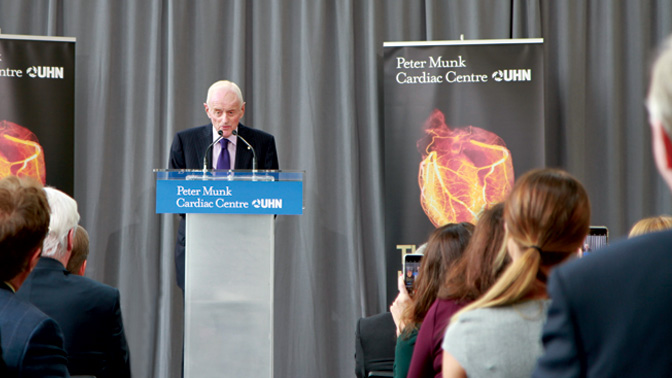 The historic award will help advance a number of important initiatives at the PMCC, including a partnership with the Vector Institute, with funds to support the creation of a research team focused on using artificial intelligence to improve care. The gift will also support the development of the Digital Cardiovascular Health Platform, which will seamlessly integrate all clinical and research data—including new sources of data enabled by technology such as connected monitors, patient-reported information and next-generation sequencing. This platform will enable new research approaches, such as machine learning, to help clinical decision-making and to drive basic research.

“This gift will change the way that patients with heart and blood vessel disease are managed in Toronto, across Canada and around the world,” says Dr. Barry Rubin, Medical Director, Peter Munk Cardiac Centre. “No other centre has what we have proposed—this will truly be world leading. With our colleagues at Techna, we will work together to commercialize the AI based approaches that we develop, to create new revenue streams that will support research at the intersection of AI and cardiovascular care.”

This donation builds upon a legacy of two decades of support from the Peter and Melanie Munk Charitable Foundation, which now totals over 175 million dollars [CAD]. “Top people only come here if you give them the tools,” continued Mr. Munk, explaining how the donation will help PMCC, UHN and Toronto draw top clinical and research talent from around the world.

Link to UHN.ca story on the historic donation.