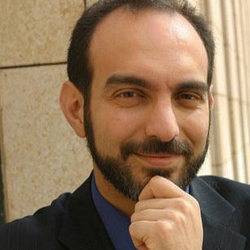 Dr. Jadad is a physician, educator, researcher and public advocate, whose mission is to help improve health and wellness for all, thorough information and communication technologies (ICTs).

He has been called a «human Internet», as his research and innovation work seeks to identify and connect the best minds, the best knowledge and the best tools across traditional boundaries to eliminate unnecessary suffering. Such work focuses on a radical ‘glocal’ innovation model designed to improve the capacity of humans to imagine, create and promote new and better approaches to living, healing, working and learning across the world. Powered by social networks and other leading-edge telecommunication tools, his projects attempt to anticipate and respond to major public health threats (e.g., multiple chronic conditions, pandemics) through strong and sustainable international collaboration, and to enable the public (particularly young people) to shape the health system and society.

Born and educated in Colombia, he obtained his medical degree in 1986, specializing in anesthesiology. By the time he was 20 years of age and still a medical student, he became a leading medical expert on crack cocaine in Colombia and an internationally sought after speaker. In 1990 he joined the University of Oxford (Balliol College), where he became one of the first physicians in the world with a doctorate in health knowledge synthesis. He developed new methods to distill high-quality health-related information and to build specialized bibliographic databases to support health-related decisions. He led the development of the most widely used tool to assess the quality of clinical trials (‘the Jadad scale’), now used throughout the world. His work helped fuel the development of the Cochrane Collaboration, a global network of individuals who are synthesizing over 500,000 clinical trials in all areas of health.

In 2000, Alex moved to Toronto, where he led the creation of the Centre for Global eHealth Innovation, a setting designed as a simulator of the future, to study and optimize the use of ICTs before their widespread introduction into the health system and society at large. He is also spearheading the development of the Global People-centred eHealth Innovation Network, a unique group of individuals, organizations, tools and facilities working in harmony to promote research, development, education, policy, funding, recognition and commercialization activities related to the uses of ICTs to promote optimal levels of health and wellness, worldwide.

He also convenes the People, Health equity and Innovation (PHI) Group at the University of Toronto, which focuses on efforts to level the playing field for disadvantaged members of society, with emphasis on youth leadership development (focusing on the role that students could play to re-shape health and educational systems), supportive care (for people with chronic conditions, terminal illnesses or advanced age, and their caregivers) and the promotion of a culture of multiculturalism, worldwide.

From 2004 to 2009, he was Founding Chair of the Board of the Foundation of the Institute for Innovation on Human Wellbeing, in Andalusia, Spain, overseeing the development of a centre and large-scale projects designed to re-create every aspect of human life, including homes, workplaces, learning spaces and multi-cultural communities. The Institute is one of the core driving elements of a €15-billion effort to enable Andalusia to transform its universities, corporations and community-based organizations, becoming a major world player in the Knowledge Age. In 2006, Dr. Jadad became a senior advisor to the Andalusian and Spanish governments, participating in high-level strategic discussions with recognized leaders such as Mikhail Gorbachev, Bob Geldof, Kofi Annan, Rigoberta Menchu and Al Gore.

Dr. Jadad was also the founding President of the Spanish eHealth Foundation (he is now President Emeritus), which enabled the creation of the Spanish eHealth Network and Revista eSalud, the leading academic journal and portal in the Hispanic world focused on eHealth [www.revistaesalud.com]. In 2005, he was invited by the World Health Organization to act as the representative for the American continent, sitting as a member of its Global Observatory for eHealth’s Strategic Advisory Group of Experts (SAGE).

Dr. Jadad has received numerous awards, including a ‘National Health Research Scholars Award’, by Health Canada (1997), one of ‘Canada’s Top 40 Under 40’ awards (1998), a ‘Premier’s Research Excellence Award’ (1999), the New Pioneers Award in Science and Technology (2002). In 2001 and 2002, he was featured by Time Magazine as one of the new Canadians who will shape the country in the 21st century, and as one of the leading medical researchers in the country. In 2004, he received the Canadian Latin Achievement Award, as one of the people who have made important contributions to the relationship between Canada and the Hispanic world. In 2005, he was selected by the Top 40 Under 40 alumni as one of “The Best of the Best” for achievements in Health and Science, and by his peers in Colombia as the scientist who probably has had the greatest impact in the country’s history.

In 2006, he received the Distinguished Lecturer Award from Health Canada’s Chief Scientist for his contributions to health and the health system. In 2007, he was invited by the British Medical Journal to author the article on the impact of computers on humanity, which was published in a commemorative issue that featured the top 15 breakthroughs since 1840, when the journal was published for the first time. In 2007, Dr. Jadad became the first Hispanic Fellow of the Canadian Academy of Health Sciences, and was selected by media and community leaders as one of Canada’s “10 most influential Hispanic Canadians”. In 2008, he received the Order of the Congress (equivalent to the Order of Canada) and the Jose Maria Cordoba Medal in his native Colombia, and published his first non-medical book (sixth in total), entitled Unlearning*. In this book, he provides a guided tour through the evolution of the human mind, ending with a view of the greatest challenges humans face at the dawn of the 21st century, and his own obituary.

In 2009, he became the Chair of the Canadian Association for People-centred Health’s Academic Research Collaborative, and of the Global People-centred eHealth Innovation Network, two initiatives that promote collaborative efforts across traditional boundaries designed to enable the health system to meet the needs of people in the age of the Internet and global telecommunications.

In 2010, Dr. Jadad chaired and convened the Global People-centred eHealth Innovation Forum during the European Ministerial eHealth Conference, and the International Forum “Youth-led Innovation and Entrepreneurship” in Brussels and Extremadura (Spain), two events designed to promote collaborative efforts among leading groups interested in optimizing human health and wellbeing through the innovative use of ICTs in all regions of the world. In late 2010, he co-chaired the First International Summit on Human-centred and Family-focused eHealth in China, becoming the Chair of the International Advisory Committee on eHealth of the Beijing Institute of Technology in 2011. He is the editor-in-chief of the first global, interactive, co-created and live book on polypathology (when people live with multiple chronic diseases), a challenge that remains poorly understood while accounting for over 60% of the health expenditures in most countries**. This effort led to the emergence of 10 global communities that are pursuing collaborative projects to tackle some of the most pressing challenges to the sustainability of the health system, while promoting optimal levels of healing and wellbeing throughout the world.