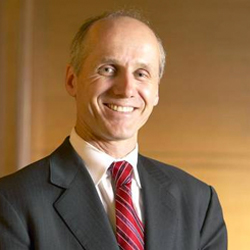 Dr. Sherar is Professor of Medical Biophysics at the University of Toronto and Senior Scientist at the Ontario Cancer Institute/Princess Margaret Cancer Centre where he carries out research and development of minimally invasive thermal therapy technologies for cancer including radiofrequency ablation.

In 2001, he was selected as one of Canada’s Top 40 under 40 for achievements in leadership. He was previously Regional Vice President, Cancer Services, London for Cancer Care Ontario and Vice President, London Regional Cancer Program (LRCP), London Health Sciences Centre (LHSC).

Dr. Sherar received a BA in Physics from Oxford University in 1985 and his PhD in Medical Biophysics from University of Toronto in 1989.